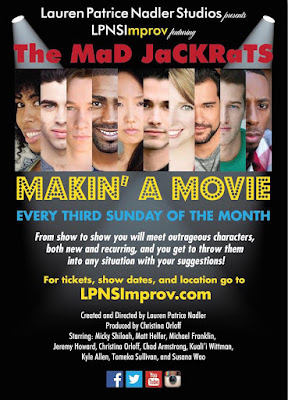 A vivacious cast, opening to an equally vibrant audience, The MaD JaCKRaTS, instructed by Lauren Patrice Nadler, played their 14th show on Sunday, September 20th and invited essenceLA along for the ride. Located in the NoHo Arts District, at the Arts Center's Theatre 68, this was a new venue for The LPNSImprov MaD JaCKRaTS, but their craft and their work in their live and completely improvised show Makin A Movie obviously keeps crowds coming back. Before the start of the show, director Lauren Patrice Nadler asked the audience how many were new guests and how many were returning and we, here at essenceLA were among the very few new audience members sitting within the crowd.

Upon arrival in the neutral colored and tastefully decorated lobby we were greeted by two smiling attendants behind the front desk and a large clear suggestion bowl and white note paper and pencils. The MaD JaCKRaTS, in true improv fashion form their shows, on the fly, according to audience suggestion. And by the time we arrived there were plenty of suggestion already in the bowl and plenty of excited audience members anxiously awaiting the possibility of their suggestion being used in the show. You could feel the energy in the air and the cast of characters was great about returning that same, contagious energy back to the audience.

The stage was set, colorful and spunky, scattered with various costumes, props and accessories. From elaborate beaded dresses and blonde wigs to nostalgic Nerf guns and break-away pants the possibilities for these courageous characters was endless and the wild audience suggestions forced them to put their creativity to the test. The show was broken up into three segments each surrounding three suggestions pulled from the lobby bowl and completely created on the spot in front of a live audience and a live webcam stream of the performance to other places. Sunday's segment suggestions included 'Iceberg' complete with hilarious Titanic references, 'Trump For President' incorporating robot assistants (Christina Orloff) and impromptu DJ skills from the company's own, Jeremy Howards and 'Superhero Rejects Convention' introducing all kinds of super characters sporting some not-so-super, but equally hilarious powers. Each segment so funny it was impossible for us to pick our favorite.

The show was great, each ensemble member bringing something different to the stage each and every time, keeping the audience laughing, and guessing the whole way through. We loved watching the cast work, sitting along the side if the stage listening to one another developing and outrageous story, and simultaneously calculating their next move. Michael Franklin in particular is one that is incredible to watch both on stage as one of his crazy characters or off stage while he is crafting his next dynamic character choice. They are a talented, diverse and quick-witted group of actors and they, in combination with Lauren Patrice Nadler's direction have put together a show that is truly keeping audiences engaged the whole way through. We surely were impressed by their craft and walked away still talking about their work the whole ride home.

The MaD JaCKRaTS are making a home for themselves here at Theatre 68 and have a new, completely original show live for you each 3rd Sunday of every month. If you have the time, their next show, coming up on Sunday, October 18th incorporates the Halloween themes and according to director, Lauren Patrice Nadler's, post-show speech it seems as though the cast might have some exciting things up their sleeves for this spook-themed show. We would definitely recommend you to check them out, and visit their website for more information on them, their work, and their up and coming shows. (Mature audiences strongly recommended.)

We thank The MaD JaCKRaTS for inviting us down to see them all, live in action and we look forward to following along with their work in the future. We know theatre, comedy and improv audiences and fans alike will all enjoy what this ensemble has to offer and we are sure the Arts Center is enjoying having them there.

Posted by essencelosangeles at 1:00 PM